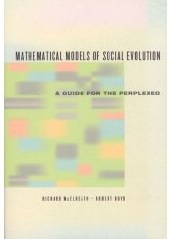 Rob Boyd and I have written a book, "Mathematical Models of Social Evolution: A Guide for the Perplexed," which is an introduction to formal models of social evolution. We target readers who have modest training in math. This means we actually show you the steps needed to derive well-known results, rather than taunting the reader with "it is easy to show..." The book is now out from University of Chicago Press.

There has been a nice surge of new introductory books in this area. It used to be that there were few good introductory texts to helps students in evolutionary biology (and human sociobiology) learn about the construction and analysis of mathematical models. Thankfully, there are several now. Each has its strengths and emphasizes different sorts of biological problems.

This is the best book I've found for teaching nervous biologists the techniques of projection matrices and analyzing stability in multi-dimensional systems. It's patient, clear, and biologically motivated (as opposed to mathematically motivated). Nice clear treatment of limit cycles.

Nice treatment of stochastic modeling, sustainability and bio-economic analysis. Has a nice chapter on probability that many students will find helpful.

Modelling For Field Biologists: and Other Interesting People
Kokko

Very approachable and example-motivated presentation. This may be the best first book for the math-phobic biologist. Also says more about solving problems through computer programming (very common among professional theorists) than other texts in the list.

Troy Day has made an informative page about this book.